This DLC requires the base game in order to play.
Field of Glory II
Screenshots You can be part of the final conquests of the Roman Empire in Britain, Germany and Dacia, and then the Pax Romana when the legions on the frontier mostly kept at bay the barbarians to the north and first the Parthians, then the Sassanid Persians, in the east. You can also witness the final disintegration of Western Roman power under pressure from the Germans and Goths (themselves attempting to outdistance the rising power of the Huns), and the desperate attempts of 5th century leaders to hold at bay the barbarian tide, using armies at least partly consisting of barbarian troops.

Legions Triumphant follows the development of the Roman Imperial Army through its heyday, its late 3rd century AD reorganisation to deal with new threats, and subsequent decline. It also follows the rise of its various enemies, the Germans and Goths, the Sassanid Persians and the dreaded Huns. 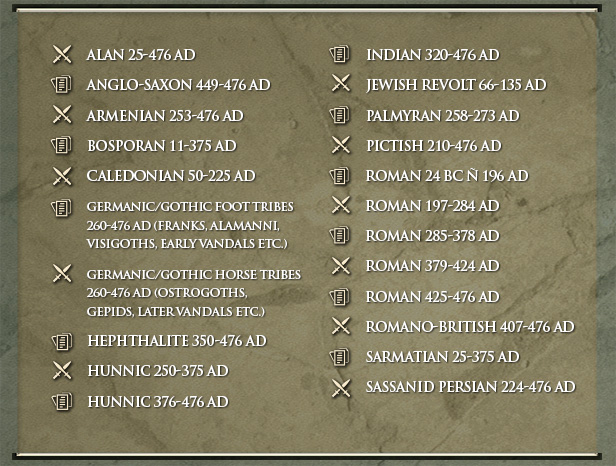 o Empire of the Huns


o Ability to fight on after a lost battle.

o Additional enemies in sandbox campaigns. You will need to fend off attacks by other enemies as well as advancing the campaign against your primary opponent.

o Units not only increase in quality following victories, but will upgrade to higher quality unit types when they reach the required quality. (e.g. Raw Pikemen > Pikemen > Veteran Pikemen).

o Anachronistic what if campaigns – by turning off the date and geographical filters you can set up sandbox campaigns between any two nations covered by the game from 550 BC to 476 AD. Additional enemies in the campaign will fit the date of the main enemy – so that it will be as if your army had been transported in time to a new era.

o Evaders may suffer casualties even if they escape their pursuers.

o Chargers will now follow normal pursuit rules if their opponents break on contact. i.e. Infantry (apart from warbands and raw troops) will not pursue.